Gabriel Pang is 68 years old.  He is one of my most favorite personal finance friends.  As much as I am helping with his personal finance, I learn much more from his experience. 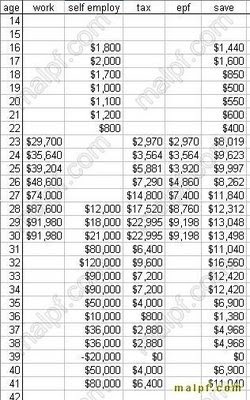 One thing he does consistently is his saving range from 5% to 30% of his income.  According to his past historical results, his saving has been giving him 5% to 12% return yearly.

Below is his cash flow chart.  It may be a bit confusing but basically it shows his total income, the taxes and loan he has been paying and a cumulative saving with return.  Top part purple color is the one when he made a lost in his own business or when he retired, then he needs to withdraw money out from his saving in order to survive which happened at age 36, 39 for business lost and then since age 42 for retirement. 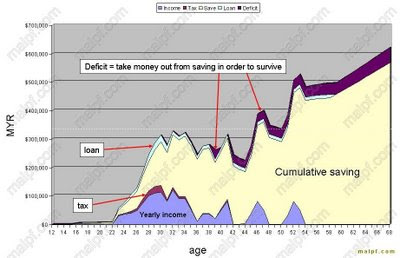 Some of the high lights of his life are shown in chart below. 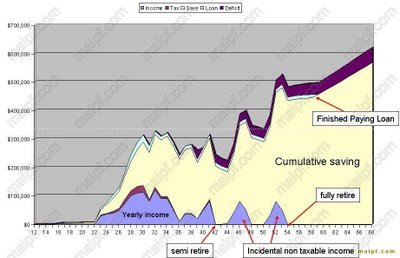 It seems like curently he has half a million saving for his retirement.  His personal inflation for the past 20 over years average is 3% and also for the past 20 years his saving has been giving him an average of 12% return consistently.  So using these 2 figures, I helped him projected that he can live on his saving until he is 98 years old. 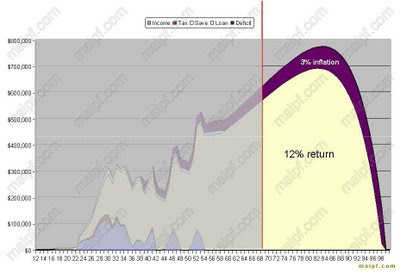 So he can safely enjoy his retirement as the way he has been for the last 20 years.

He only worked for less than 10 years and his own business only lasts 13 years with some years making losts.  His average annual income is about $50,000.

What has he done that he can retire the way he wanted so easily ?

Hi, this is the -20k guy, Can u share your opinion:
Is bankruptcy a good way to get out of debt and start all over again in Malaysia? I have no special requirement in current and future life and I have no issue to live relatively simple/poor if i have to. It is bothering me to live like a machine to pay for the money that I dont owe.

in general bankruptcy is not a good way to get out of debt, especially for only 20k. But nevertheless it is one of the last methods.

I assume Gabriel Pang has no children after he got married??

If not surely their upbringing will incurred a heavy cost.

good observation, actually he is married with 3 kids. but the way he brought up the kids are slightly different than the normal 6k per kid scenario. And by the time he was 42, he setup different accounts for his wife and kids so life after 42 is almost like a single man account.

he stop contributing to epf at age 30 and that point of time there was 50k inside epf ad now the is abt 900k? how is it possible?

50k was his own contribution, employer about 65k, totalling 115k+

average return for his epf is 5.6%

epf wasn't included in his assessment actually, as per his request

I will correct the confusion in the post later, thanks for pointing this out.

Could you help to provide some info about bankruptcy in Malaysia please? I'd really like to try starting from zero