Do you know that you can actually save up to RM 925 by paying attention to your tax even if you are only earning Rm 3,000 a month ?  The example is illustrated here !

This is a reminder last CALL for you to optimize your 2012 tax.  IRB may actually pay you a bonus this year !
5 comments:
Email ThisBlogThis!Share to TwitterShare to FacebookShare to Pinterest
Labels: tax

Buying opportunities again ... are you dare to go for some year end bonus this year ?

TM : no major news, could have bought in today.  Should be a good keeper. 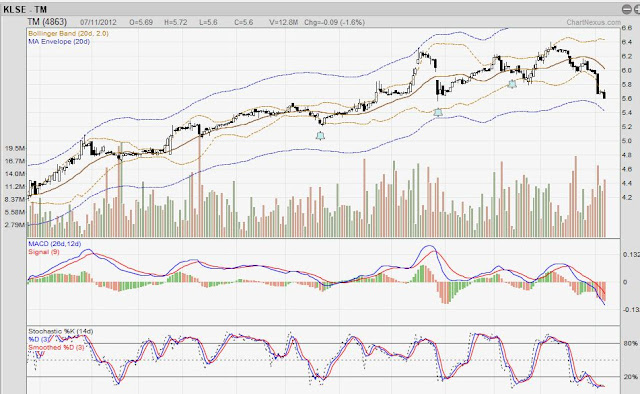 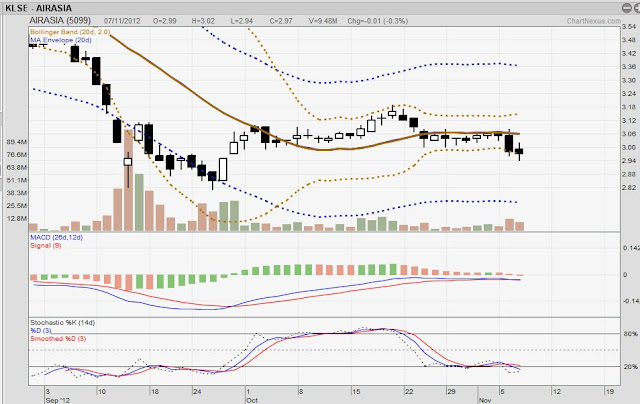 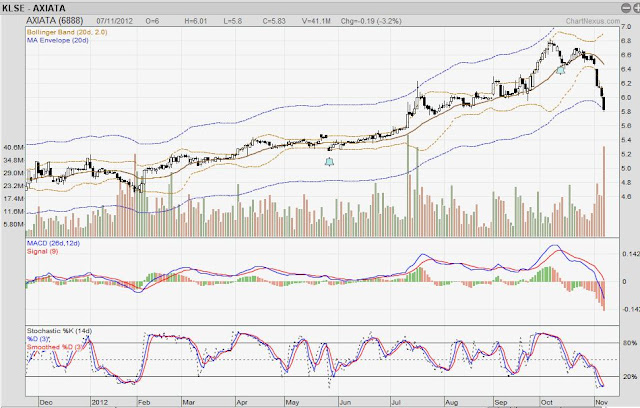 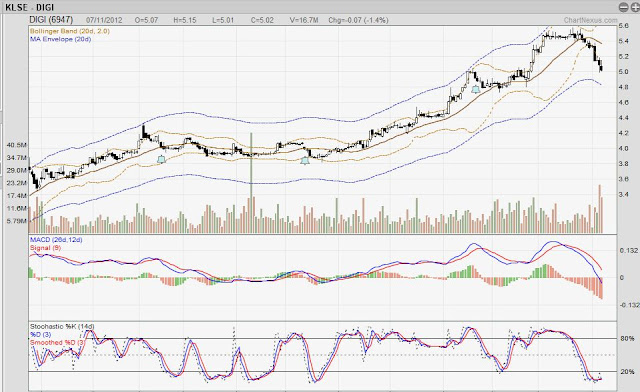 PBBANK : NO Major news, EPF continuously holding up.  But technically just started a down trend.  Don't chase down trend, wait a bit on this one. 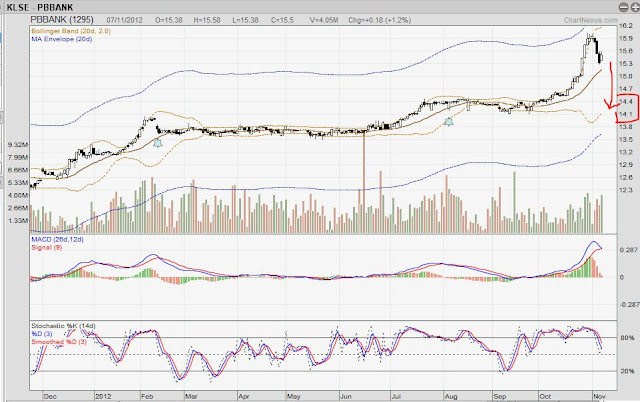 What is your opinions ?  All comments welcome ...
3 comments:
Email ThisBlogThis!Share to TwitterShare to FacebookShare to Pinterest
Labels: stocks

In stock investment, you should learn how to see the mega trend.  When it is generally a bull trend, you simply buy some blue chips and it shall earn you some good money.  When bear comes, you took your profit.  As long as you don't stay too close to the market, this can rather easily be achieved.  Just walk around a wet market and ask 10 stalls how the market is.  You will be surprised how closely their non-professional opinions are related to the real market performance.

Then you must realize NOT ALL stocks are the same.  Even during an obvious bull run, there are some stocks going down.  Like wise during bear runs.  Some stocks will still go up.  Finding out these 'Reversal Stocks' is important for a full time traders.

The reason goes like this:  there is a fix amount of money floating in the market.  The mega fund managers simply CAN NOT withdraw TOTALLY from the market even if it is GUARANTEED a bear market.  They are required by law to keep investing ie. 70% of their fund.  So during bear market, they will focus on a few stocks to minimize loses.  As a result, during bear market, a few stocks will always be on a up trend.  And not surprisingly, those are the stocks didn't join the previous bull run.

As long as you have done your fundamental analysis, knowing mega trend stocks and reversal stocks allows you to invest both during good and bad time.
2 comments:
Email ThisBlogThis!Share to TwitterShare to FacebookShare to Pinterest
Labels: stocks

Cheated or Own Ignorance ?

a Guaranteed 20% return investment was introduced earlier and it is indeed legitimate.  But do you know it is like an offer " Give me $10 now, I will give you back $9 ".  And of course it is Guaranteed !

Have you ever heard of an investment with Guaranteed Return 20% ?  Well, this particular one is from The Gold Guaranteed . . . what do you think the catch is ?

MPlus Online and ECMmoney offers the lowest brokerage fee @ 0.08% for cash upfront account.  MPlus offers even lower rate @ 0.05% if you have more than 30k balance.

I have been using Jupiter but I am paying 0.45%.  I forgot why I pay so much, perhaps its because I am an Elite member who obtain extra trading info !?  My effective fee cost is actually 0.6% and below.

I tried to switch to CIMB but not successful due to their systems are not easy to use.  I stay with Jupiter mainly because I can trade from my android phone.

Have you used any of above brokers ?  Are they good ?

How Corrupted are we ? 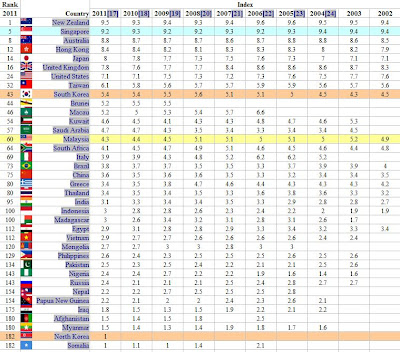 Malaysia is somewhere in the middle comparable to Soudi Arabia, South Africa and Italy.


Read this from Alan Tan's facebook, seems very meaningful to me.  So sharing here with you all ...

One day, an old man and his assistant arrived at a farming village. The old man gathered all the villagers and told them that he is in the business of buying and selling monkeys and that the reason why he has come to their village is becoz there is a forest next to that village which is infested with lots of monkeys. He told the villagers he would pay $10 for every monkey they bring him.

Tenaga Malaysia WILL charge you more if you have in-efficient electrical appliances, old wiring etc. at your home.
No comments:
Email ThisBlogThis!Share to TwitterShare to FacebookShare to Pinterest
Labels: Money

Try give these stocks an eye ...

MRCB : worth buying below 1.80, potential peak 1.90, can observe for another 3 trading days before making decision.

UEMLAND : worth buying below 2.00, potential peak 2.08, observe another 5 trading days before decide.

DIALOG, MAXIS : some recommended this but not me.


No comments:
Email ThisBlogThis!Share to TwitterShare to FacebookShare to Pinterest
Labels: stocks

FREE lunches - the real one !

While many people still think there is no such thing as FREE lunch in this world.  I have been having FREE lunches for more than 5 years now.  Not only that, I actually get paid when I eat.  Sometimes they even force me to bring a friend with me for FREE too !

Who make money from stock market ?

why some idiot can earn money from stock market but some smartest analysts don't ?

23. The Maminco attempt to corner the World Tin Market in the
1980s is believed to have cost some US$500 million (RM1.6
billion)

26. Use of RM10 billion public funds in the Valuecap Sdn Bhd operation to shore up the stock market

30. For the past 10 years since Philharmonic Orchestra was established, this orchestra has swallowed a total of RM500 million. Hiring a Kwai-Lo CEO with a salary of more than RM1 million per annum!

32. The government has spent a total of RM3.2 billion in teaching Maths and Science in English over the past five years. Of the amount, the government paid a whopping RM2.21 billion for the purchase of information and computer technology (ICT) equipment which it is unable to give a breakdown. Government paid more than RM6,000 per notebook vs per market price of less than RM3,000 through some new consortiums that was setup just to transact the notebook deal. There was no Maths & Science Content for the teachers and the notebooks are all with the teachers' children now.

33. The commission paid for purchase of jets and submarines to two private companies - Perimeker Sdn Bhd and IMT Defence Sdn Bhd amounted to RM910 million. Expanding on No. 2?

38. RM1.3 billion has been wasted building the white elephant Customs, Immigration and Quarantine (CIQ) facilities on cancellation of the Malaysia-Singapore Scenic Bridge

39. RM100 million on renovation of Parliament building which leaks

42. Eye of Malaysia - RM30 million and another RM5.7 million of free tickets

46. Two bailouts of Malaysia Airline System RM7.9 billion. At a time when MAS is incurring losses every year, RM1.55 million used to buy three paintings to decorate its Chairman’s (Munir) office. Expanding on No.11

54. Wholesale distribution of tens of millions of shares in Bursa Malaysia under the guise of NEP to cronies, children and relatives of BN leaders and ministers worth billions of ringgit.

55. Alienation of tens of thousands of hectares of commercial lands and forestry concessions to children and relatives of BN leaders and Ministers worth tens of billions of ringgits.

56. Since 1997, Petronas has handed out a staggering RM30 billion in natural gas subsidies to IPPs who were reaping huge profits. In addition, there were much wastages and forward trading of Petronas oil in the 1990s based on the low price of oil then. Since the accounts of Petronas are for the eyes of the Prime Minister only, we have absolutely no idea of the amount.

58. Government-owned vehicle consumed a tank of petrol worth RM113 within a few minutes

65. US$24 million Diamond Ring for Ro$mah - Cancellation of Order - how much compensation?

69. Tajudin-Danaharta settlement to cover up for Dr M and Daim

70. Billions of ringgit toll concessions that disadvantage the government and taxpayers

71. MUSA-AMAN's Timber-Concessions kick-backs worth $90Million US Dollars into his personal account causing thousands of acres of precious Rainforest in Sabah ( homes of endangered wild life such as Orangutans, Borneo Pygmy-Elephants & the Sumatran Rhino ) to be cut-down....
No comments:
Email ThisBlogThis!Share to TwitterShare to FacebookShare to Pinterest

Alliance offers the lowest car loan rate at 2.65% but it may goes up to 4.8% as well so it really depends on your negotiation skill.

The answer, contradict to common comments, is actually home loan but . . .

I love reading personal finance topics on line and there are so many GREAT sites out there . . . if you were like me, have you ever wondered who the person is behind the site ?

So I started trying to know more a bit out the person behind the web site - I asked for their permission for me to conduct an email interview with them.

First I sent out an interview request like this.  Not everyone replied of course, but I manage to get a few reply from the sites I love most ....