It is rather interesting to see how KLCI performs opposite of the rest of the world.  Although today's world chart patterns are the same but KLCI stays above of previous closed price while others dangling along their prevous closed prices.  Which is still considered significantly out-performing. 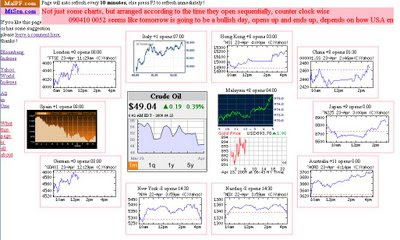 view real time world stock market data here
There are a few indications from this scenario.  Most are bad and one posibility to be good.
Bad 1 : General public do not believe in correction and still trade in bullish mode.  (more than 60% of my trading friends are actually in this group too)  People are still rushing in hoping to get similar returns like the past few weeks.  Although some would still able to enjoy some quick profit but such a 'delay' correction will only cause a bigger than expected correction.
Bad 2 : Goverment agencies pumping fund into the market to substain the illusion of new PM effect.  Should it really correct later at worsen level, then what is doing now will make 'us' lose more of our EPF and/or tax money.  However, the few companies that are invested by the fund managers happened to be the ones that I can agree with (able to buy now to keep for the next 2-3 years).
Good 1 : Recent varies changes instilled in China and also a few other countries are mostly considered as the 'correct' moves.  The sign of China reducing its dependencies to the western world has already started.  Although the affected industries will never revive as it used to be, but a lot of new businesses are given the chances to mushroom too.  However, any kind of policies changes will take as least 1-2 years before any real benefits are gain from them.
After above qualitative accessment, let's look at the technical analysis. 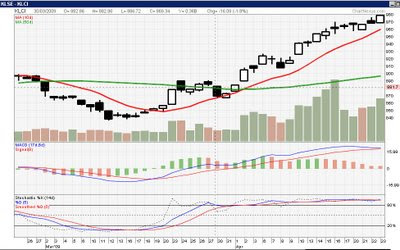 Stochastic (14-5-5) has been long oversold so the trigger to crash isn't exactly apparent anymore.  But some experts do recommend 'stay away from market' based on this pattern alone.
MACD (17-8) is about to cross.  If markets stay at 970-975 for another day, the signal will be triggered.  The only worry is the fund managers will use this as the trigger point and market will crash from there onward.
Moving Average (10d) shows that as long as KLCI stays above 965 on Friday 24 April, it should be fine for another day.
Having seen all, I think that there are not much foreign fund in our market anymore.  So its only a game between the public and the fund managers.  Since the public seems bullish so as long as the fund managers do not trigger any panics, we can live through another week.
It would be very interesting to see if this 'delay' correction would actually cause a worse crash in the next 2 months to come, ie. touches 816.
As of right now, half of my long term fund is in place riding this up trend now.  All of my speculation funds are out of the market now.  I am staying away from the market, most probably no need to come back until 1 month later.
What is your view ?
Email ThisBlogThis!Share to TwitterShare to FacebookShare to Pinterest
Labels: stocks

Did you know that the last date of our Malaysia tax filing is 30th April 2009? A penalty will be imposed if you are late.

There is a great soft3ware, Taxsaya 2008, a FREE tax filing software for your 2008 assessment, is ready for download. Whether you have submitted your tax or have not submitted, Taxsaya will be able to help. If you have not submitted, TaxSaya helps make your tax filing to Malaysia LHDN so easy, you would never believe it until you give it a try. If you have submitted, no problem, TaxSaya also can help optimize your tax, so you will know if you have been over assessed to be prepared for next year submission..

Please visit http://www.taxsaya.com to get your very own FREE Taxsaya today.