Although a bit late, but finally its released.  Or has it been released for sometime and only now they email me ?  Anyway taxsaya is one of the few great softwares given that we have limited choice in personal finance softwares for malaysian.

2008 version is much better than 2007.  You will have to download different version for different filing years.
You will also need to uninstall previous version of 2007 if you want to work on your 2008 version.  Else the 2008 version will report problems looking for something from 2007.  This has already been reported to Taxsaya and may be fixed by the time you read this article.

Actually Taxsaya commented that you don't need to uninstall 2007 to use 2008's version.  Above comment is only specific to my own case.  When running the 2008 version, it will automatically import some of your 2007 info over so that you have less hassle.  Things like personal details, child, spouse, employment, rental property, insurance etc. do not need to be re-entered in 2008 version if you already enter those in 2007's version

2008 versions are concentrading on asking relevant and crucial questions and then give you the key information straight away.  This is much better when comparing to 2007 version.  But if you are using it for the first time, you may still find it cumbersome going through the wizard; which would be a feeling you should get over with if you are serious in your tax filing.
This is the screen you will see at the end.  Notice that they will tell you how many tips they think they can help you optimize your tax filing.  That is the part you will need to pay about RM 20 for it. 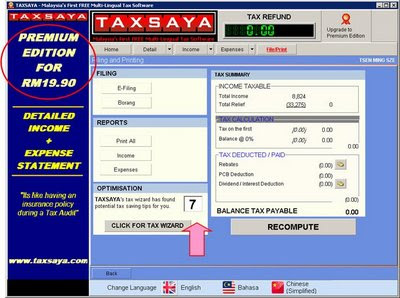 I haven't get the full version yet and I haven't explored all functions yet.  I am also not associated with Taxsaya and I don't get benefits from them.  But I admire their persistency in getting it through this 2nd year, despite the not-so-good 2007 version.  So in the good spirit of (1) promoting more people to care about their own income tax and also (2) encouraging local software development company (on personal finance software), I am thinking to sponsor this MYR 20 fee for my readers.  But I haven't figures out exactly how to do it yet.  It wouldn't be free money give away to avoid abuse, but rather something like if you buy some of my trading items up to RM 50-60 then I will sponsor the paid version of Taxsaya as well. 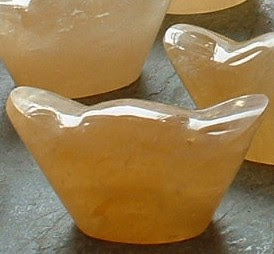 x 10 pcs
It would be a scam if the selling price of above items are higher than market price so I would throw in lowest price guarantee as well.
Or simply email me why I should simply give you RM 20 for free :)  I always appreciate honest and direct truthful sharing.  Decision to give would be at my mercy :)
Sorry above offer is NO LONGER valid.  After testing the paid version, I think its better to just use the FREE version first.  Unless you are REALLY HAPPY with it, then go ahead pay for it.  Otherwise, the optimization tips are just too simple and you are most probably already know those tips.  And usually not implementable at this stage of time.
Things that I think TaxSaya can improve on:
Try download immediately here, or actually you should visit their web site and let them verify your email first.
Email ThisBlogThis!Share to TwitterShare to FacebookShare to Pinterest
Labels: Offers, tax

That is so sad, tax codes are getting more complicated but disposable incomes are down. Sigh...

ya meh ? I thought many goodies have been given ... may be you should download the free version first ...